My Story Of Conflict At Work

Turning conflict at work into peace 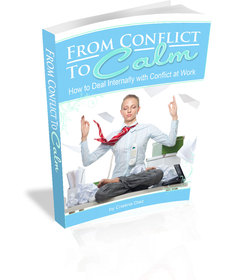 *Please note that the names of the people involved have been changed in order to protect their privacy.

It hadn't been a month since our new manager, Gail*, had joined the company, and I was already feeling that something was not quite right.

All I knew is that I felt quite uncomfortable dealing with Gail, and that I was not the only one feeling that in the team.

However, what I didn't know was that my almost three-year-long particular nightmare of conflict at work had just started...

I started to feel singled out in very little time. All my colleagues were also affected by Gail's behaviour, but for some reason she seemed to pick on me to exert her control particularly.

Initially I felt irritation about things like that. Slowly, my irritation grew into anger. At that point I still did not know how to handle my feelings about her attitude and behaviour in a better way, so I suffered emotionally a lot.

The anger that I felt at the attitude and behaviour of Gail led me to react in ways which only aggravated the conflict at work. I thought that I could fight fire with fire and win. That was not the case.

I had to experience anger and try different ways to deal with it for quite a while before I moved on to a different emotion.

Unfortunately what followed was depression. Tired of fighting and seeing no positive changes, I felt frustrated and powerless. I dreaded going to work and even had nightmares about Gail. I gave up wanting to change anything.

I started to come out of this depressive state little by little by putting different techniques in practice. But there was still one last obstacle for me before I could finally start seeing changes to my situation of conflict at work... I realized that I harbored a deep feeling of resentment towards Gail and a want for 'revenge'.

Not that I was going to actually harm her or anything on the line! The ways in which my need for revenge showed were subtle: a silent "I will tell your boss about this that you're doing".

I eventually got to see that this strategy was taking me nowhere. I made my way out of resentment through the path of compassion; and then, only when there was no more negative energy left to feel, there was a whole turn to the story.

Having worked through the disempowering emotions of irritation, anger, depression and resentment, the stage was ready for me to arrive at the solution to all conflict from then on.

During a meeting with Gail, which I approached with a new attitude, I discovered the one tool that helped me to move forward, and to actually start seeing conflict disappear altogether.

I put this tool to work over and over, and to my amazement, in a few weeks I was no longer trapped in a situation of conflict at work.

I then decided to put all that I learned in writing to be able to help others who may also find themselves in a situation of conflict at work. In this way, 'From Conflict To Calm' was born.

In 'From Conflict To Calm' you can find tips and techniques to deal with the negative emotions and thoughts that come about when you have conflict with someone at work. Through my own story of conflict with my boss, I show you how to move from a place of stress to a place of peace.

I also give you the one tool that will help you overcome any problem at work and leave conflict behind altogether - the tool that you can put in practice anywhere, any time. You will learn the exact and easy steps to open the door to a new way of living.

Follow this link to go to 'From Conflict To Calm'.

Back to Obstacles In Life

'Yes To Life' contains tips and techniques to deal better with the challenges of life and to maintain a state of peace and joy.

Make sure you get your copy of the newsletter...

Click here to read what others have to say about this site.