How To Effect Positive Changes?

If you've ever tried to effect positive changes in your life with no success, then read on - you may just find the key to making good changes.

You may be tired of a certain situation or state that you've lived many times. It may be that you've been wanting to lose weight or exercise for a while, or you may have wanted to change detrimental patterns of thought, without major success.

Some of us have made new year resolutions in an attempt to change a certain area of our lives for good, or have taken a decision one day ("Right, that's it, from now on..."), just to realize a few days later that we're repeating the same patterns we were in.

Some of us have made new year resolutions in an attempt to change a certain area of our lives for good, or have taken a decision one day ("Right, that's it, from now on..."), just to realize a few days later that we're repeating the same patterns we were in.

In my experience, the 'one-time-resolution' does not help to make positive changes, because it does not take into account the ingrained habit of thought or behaviour that we have, or the reasons why we keep those habits.

What does work is to go about it bit by bit, in small steps. I have found that the kaizen way works wonders to implement new positive changes because it is realistic and it asks that we just take the tiniest step possible. In this way, whatever change we want to make becomes doable instead of overwhelming.

A very important thing to remember when creating changes is that it comes down to taking a decision on a moment-by-moment basis.

For instance... I really like riding my exercise bicycle. The problem is that I tend to reason that when I just arrive home from work all I feel like doing is relaxing, and when I'm at home I always have something more 'interesting' or fun or important to do.

However, if I take a break from, say, my computer, and stand up and see the exercise bicycle next to me, all it takes me is to simply take the tiny action of getting on the bicycle. 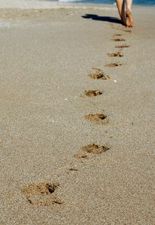 That little decision at one moment is really all that is needed for me to ride the exercise bicycle for a few minutes.

Taking a decision at a time helps to overcome resistance, which is the reasoning "It's going to take me a lot of time" or "I don't see how I can make good changes in this area which is so complex" - anything that piles up thoughts and makes us feel that we really cannot tackle that area in which we want to make changes.

However, by using tools like the kaizen way, and taking one small decision at a time, we actually start taking the actions that create positive changes.

When this happens, the old pattern of though or behaviour coexists for a while with the initially scattered moments in which you take the action that leads you to change.

You then continue taking tiny steps more and more, and so it comes a time in which the new behaviour happens more often than the old behaviour.

And so the old behaviour fades away, and maybe sometime you look back and you realize that you no longer hold the old pattern of behaviour.

However, life is a continuous journey and "we never get it done". Whenever you arrive at the stage you want to be at, you're going to have other plates spinning, other areas of your life in which you want to make changes.

The point is not to seek the arrival stage, but rather the 'continuous improvement' feeling that you get when you make small positive changes - the feeling that you are, in fact, displaying a new behaviour.

“Never doubt that a small group of thoughtful, committed, citizens can change the world. Indeed, it is the only thing that ever has.”

Back to Positive Habits